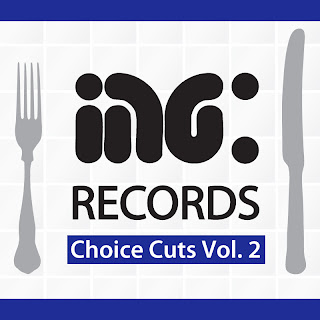 Psylence picks some of the best tracks from the Ing: back catalogue to prove once again that the drum & bass underground is as strong as it ever was.


A massive set of tunes, we think you'll agree. 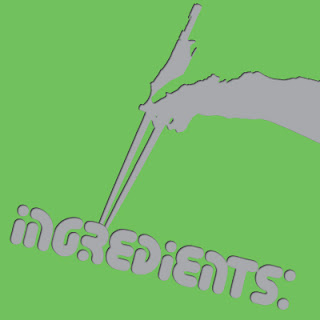 Posted by Ingredients at 03:11 No comments:

Well it's the best breakfast if you know how to make it & the worst when you try but fail miserably.
The trouble is, you've got to try it a few times (like anything) until you really nail it.
And yes before you ask, i'll take you through Eggs Florentine, Royale as well *raises eyebrows

Some people have it with toast or brioche but i always prefer toasted muffins.
Their size is perfect & you just cut them in half & toast them. Easy.

All of these have Hollandaise Sauce which is the 'piece de resistance' of sauces & is fairly easy to make, but does take some work in getting it right.

This is not the ONLY way, but it works. You will need:


Melt the butter in a pan & leave to cool. Meanwhile boil some water in a bigger pan. Once it has reached boiling point, crack 4 egg yolks into a metal bowl (preferably) & then add a 2 Tablespoons of the vinegar. Place the bowl over the pan of water and begin whisking the Eggs & Vinegar.
You don't have to whisk like there's no tomorrow, just get into a nice rhythm & you'll see as the eggs cook they will slowly start to froth up.
The trick to cooking the egg yolks is that you should take the bowl off the heat every other minute so that they do not over cook or scramble, Keep whisking all the time but just don't allow the bowl to get too hot. Keep doing this making sure it is all cooked through, it will begin to look like custard, more creamy than frothy.
There is a nice thickness you want to get to & this will probably take a few goes at it.
So now you have the cooked eggs in vinegar place the bowl on the table, perhaps put a cloth underneath as you need it to be stationary as you add the butter & both hands will be full.
Slowly, very slowly, start pouring in the melted butter & whisking it through the eggs, don't go too fast. Keep adding it until you get to the white at the bottom of the pan & STOP!
Don't add that bit it's fat & will taste horrible. You've added the nice part of the butter already.
It should resemble a nice thick yellow sauce, so now you have to season it. Don't be shy, it takes a fair bit of salt.  When you go to use it, add a good squeeze of Lemon Juice and mix it through just to loosen it up again for serving

Right well you've got some boiled water already, so maybe top it up with some more water & get it boiling again & pour in a good splash or two of white wine vinegar, this keeps the poached eggs nice and white. The trick here is to boil the water, turn the heat down so the water is simmering,
crack an egg just above the surface of water into the pan, wait 10 secs, add another, then another
& so on. Probably wise to only drop 4 in but you can probably handle 6 if you're good. Now turn the water up so it start tumbling again, don't walk off somewhere!
Make sure it's nicely boiling & not too ferociously. They take around 5 minutes to cook so get a container ready with cold water in, drop them into that one by one & then drain off the water.
This will stop them from cooking much further but still be quite hot.
Eggs benedict is usually Toasted muffins, Ham, Eggs & Hollandaise. Fairly east to construct if you have the sauce & eggs made already.
Eggs Florentine is using Spinach, so pre-cook this in water, then leave to drain, once cooled down squash as much water as you can out of it using some paper-towel, then season a little. Re-heat in a bowl in the microwave if you need to, but if you time it right then it will still be hot enough to serve.
Eggs Royale is basically Smoked salmon, used in the same way as the ham, you can warm it through if needs be but i rarely do. So constructing all three is fairly easy, it's just a cse of making the sauce, getting the poached eggs on & toasting the muffins.
Posted by Ingredients at 13:51 No comments: 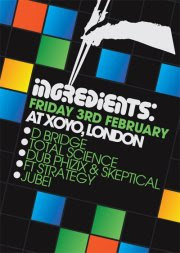 Posted by Ingredients at 02:10 No comments:

Email ThisBlogThis!Share to TwitterShare to FacebookShare to Pinterest
Labels: Event

The first big track of the year (in our opinion) is being let loose next week, and we're pretty excited about it.

It drops on Monday 23th Jan, but you can pre-order now and have it shipped on Fri the 20th cuz we're nice like that. 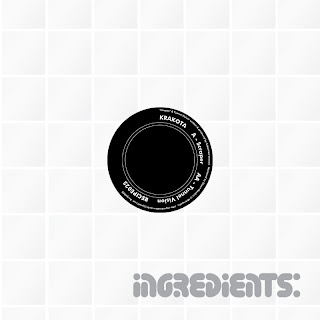 An eerie, techy effort with a bit of added bite, Scraper has been getting great support from Marcus Intalex, and b-side Tunnel Vision brings some techno vibes to intelligent drums and an addictive rolling bassline.

This year is gonna be a big one for Krakota, we can feel it. With tunes like this, how could it not?

Posted by Ingredients at 01:54 No comments:

It's the winter and we all love soups for lunch this time of year. Admittedly, it's not that cold at the moment but still, who needs an excuse to eat a home made soup! I think the best thing about them is that they are cheap & relatively easy to make. The important thing when it comes to cooking at home is having the tools. For soups, you simply need a nice sized saucepan (£30), some plastic tubs for portions and a food blitzer (the hand held ones are fine). Once you've invested in these you will be able to cook soups for years and make a huge saving, not forgetting the pleasure of tasting your own fresh cooking.

Most soups are vegetable based, so my tip is to dice or slice the vegetable of choice, and sweat them in the saucepan for as long as possible, til pretty much cooked. This will bring out the flavour of the vegetable and also make the soup have the colour it should, too.

Don't always assume soups start with Onion! So many people do and ultimately it takes over the soup's flavour, so steer clear unless of course it requires one (Tomato and French Onion spring to mind).
So now i've got you in the Soup world i may as well give you some recipes of soups i like to make for my working week, and like many, where you were spending around £40 per month you should now be spending around £20 for the same volume of Soup.

Chicken Stock:
Sundays usually mean roast dinners, so if you have roast chicken keep the carcass and boil for an hour in a pan with 2 pints of water, a white onion, bay leaf, pepper corns and a leek if you have it.
Drain into a bowl void of all the bits and leave to cool. Skim off the fat.

6 x Leeks chopped and sweated in the saucepan with some butter until soft.
1 x Large potato peeled and sliced added to the leeks
1/2 pt Cream
1 Pint of Chicken Stock
Boil this slowly for an hour.
Blitz in the saucepan adding 3 stems of Tarragon leaves, season as you go with Salt & Pepper
Finish with a good squeeze of half a lemon, stir and serve.

Cut off the Brocolli stem and chuck away. Roughly cut the Brocolli head and sweat in the saucepan with some butter, keep stirring it as it tends to not like being cooked in this manner!
Add some of the stock, the peeled & sliced potato and let it simmer in that for 10 mins, before adding the rest of the stock, the garlic and the milk.

After 40 minutes, making sure the potato is cooked (it will be) begin blitzing adding some cubes of blue cheese. I'd say the equivalent of half the size of a standard wedge of Blue cheese is ample.
Careful when seasoning it, you may not need to because the cheese is salty. How easy was that!

I sort of made this up one day and I'm almost addicted. Ok, it's unlike the Soups above, but you have to try these things out, you can't keep making two soups all your life.

1 x Chicken Breast
1 x Clove of Garlic
1 or 2 x Green Chilli (remove the seeds)
2 Tblsp Worcester Sauce.
Chop the Chicken into about 10 pieces, fry in a pan with a little oil, worcester sauce,
garlic & sliced chilli. Remove from the pan and set aside.

Chop the sausage into nice edible sized chunks & fry in the saucepan, once browned add the chicken stock. Add the the tomatoes and stir in the cream. Leave to simmer for 20 minutes and then add in the Chicken & let it cook together for another 20 minutes. Season with salt & pepper. Try this out a few times until you got it how you like it.

A simple, healthy soup. Sweat the Carrots in some butter (or olive oil) with the celery
Once cooked, add the apples, ginger and chilli & add some of the stock & let simmer for 10 minutes.
Add the rest of the stock & blitz. Season with salt & pepper to taste.

Pea & Ham has to be one of the best soups ever! Here's a simple version:

In a big saucepan start cooking the white onion, add the peas & the diced potato.
Add the garlic and stir through for 5 minutes. Now start adding the stock and leave to
cook for 30 mins. Add a good bunch of mint leaves and the Milk / Cream.
Begin blitzing until nice and smooth. Chop the Ham into pieces and add to the already blitzed soup.
Leave it to fuse for an hour is my advice.

Posted by Ingredients at 14:10 No comments:

Email ThisBlogThis!Share to TwitterShare to FacebookShare to Pinterest
Labels: Recipe

You had turkey for Christmas (and boxing day, and the day after, and the day after) so on New Year's you'll probably want something different. Now, we're not sure about you, but New Years Day roast dinners are usually standard procedure up in our houses, and due to an over-indulgence in poultry, it's nearly always lamb. It's become a sort-of tradition. However the official Hangover Bank Holiday is probably not the best day for getting out the sharp knives and playing with hot roasting tins, but if you're entertaining notions of cooking for mates despite the state of your head 1) good on you, and 2) what about cooking something simple that looks a bit showy?


Enter Psylence's Lamb & Brie Burgers. A little bit special, but meaty enough to satisfy the weariest of post-party appetites, they'll also use up the remnants of that elaborate cheeseboard you've been working through since Christmas Eve (we know you opened it early. Naughty.)

Nice with some sweet pepper relish.

Posted by Ingredients at 07:18 No comments:

Christmas is a time for giving. It’s also a time for stuffing your face with all of the chocolate, so this next recipe is a combination of these two important aspects of the festive period – namely lots and lots of chocolate, and giving you a couple of extra pounds to work off in the new year. We’re nice like that.

Posted by Ingredients at 07:41 No comments:

Upcoming Releases and Other Goodies 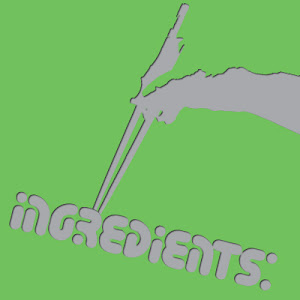 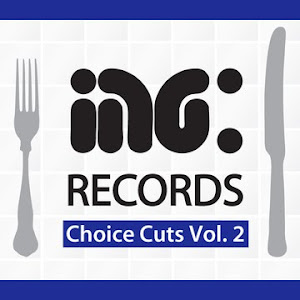 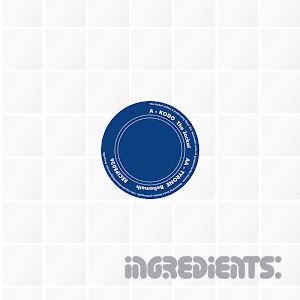 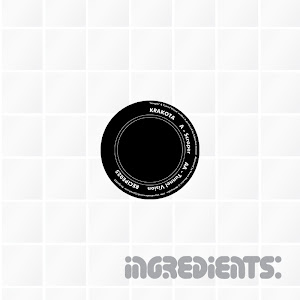